By now you have probably heard that the Philippines was hit by a major typhoon yesterday.  Here’s a link from The Weather Channel:  http://www.weather.com/outlook/weather-news/news/articles/super-typhoon-philipines-photos_2010-10-18.  While it turned out to be a non-event for us in the Manila area, the northern part of the Philippines was hit very hard.

We are very concerned for Marissa’s aunts, sisters and younger brother that live in Ilocos Sur.  They are on the northwest coast near the South China Sea, which hopefully wasn’t damaged as much as the Pacific coast on the east.  But it’s quite likely that they faced 160-180kph (100-110mph) winds.  Marissa has not heard from them as of yet.  I am hoping that we will get confirmation that everybody is OK later today.

I strongly encourage you to donate to relief efforts, as many people will have lost their homes and their livelihood.  We plan to give to Marissa’s family directly to help with building damage and crop loss as well as donating to general relief efforts.

Finally things have slowed down enough that I can catch up on blogging again.  The last month has been very busy with the mechanics of the transition.  Ramping up on my new job and looking for an apartment and a car have soaked up most of my free time for the past few weeks.  I’ll pick up the story of our move at the point where we left Portland. 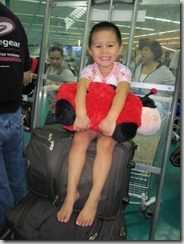 We had a rude surprise as we checked in for our flight from Portland to Honolulu and Manila.  Hawaiian Airlines charged us extra baggage fees for our Portland to Honolulu leg.  This is the first time we have ever been charged extra for luggage on an international itinerary.  Thankfully I was able to add the additional charges to my expense report.  But I’ll definitely have to keep that in mind for future trips.  Other than that I liked Hawaiian well enough.

We arrived in Honolulu as expected, but made the mistake of walking to baggage claim rather than riding the shuttle bus.  We got there just fine but it was a bit of a trek.

We found out that we couldn’t check our bags through to Manila from Portland, so we had to get our overstuffed bags out of baggage claim, drag them to the Hertz shuttle bus, and keep them with us overnight.

That proved to be a problem as we had reserved an intermediate car.  There was no way that three big rolling duffels, a large suitcase, a smaller suitcase and 3 carryons were going in the trunk of a Nissan Altima.  Thankfully Hertz was able to upgrade me to a Ford Flex on the spot.  Everything fit into the Flex just fine.  I have been wanting to try the Flex, as I’ve heard a lot of good things about it.  I found that it compared very favorably to our Explorer. 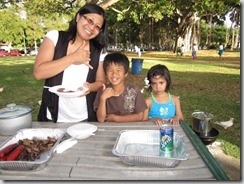 One great thing about being married to a Filipina is that she has friends all over the world.  Due to the lack of opportunity in the Philippines, many Filipinos emigrate to elsewhere in the world in search of better employment or business opportunities.  Marissa has friends in Australia, Hong Kong, Malaysia, Saudi Arabia, Qatar, Dubai, Israel, Italy, Spain, the UK, most states of the US, Canada, and more. 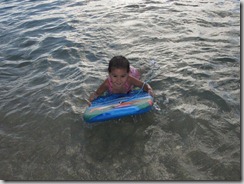 It’s truly a global community.  For our stopover in Hawaii she tracked down college classmate Joelle Anne.  Joelle Anne totally hooked us up with a hotel room right on Waikiki Beach at an employee discount rate.  We spent some time hanging out on the beach, let the kids play in the surf, and caught up with old friends. 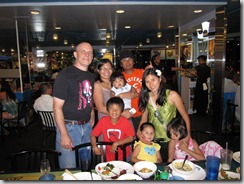 Later on we went out to dinner.  The funny thing was that we ended up going to Todai, a seafood buffet restaurant that also has a location in Portland.  It had been a long time since we went to the Portland Todai, so it was nice to have an opportunity to go there again.

On Sunday morning I got up early and enjoyed some quiet time on the beach watching the waves and the surfers.  I even saw a couple practicing tandem surfing.  It looks hard enough doing lifts on a dance floor or ice rink.  I can’t imagine how difficult it must be to do acrobatics on a surfboard while riding a wave.

All too soon it was time to head back to the airport for the next leg of our journey.  For the most part the flight was long but uneventful.  We were definitely thankful for Nintendo DS.  My seatmate for the long flight was very congenial. He was headed to the Philippines for both business and personal reasons.  I suspect that the personal side of his trip will work out, but there was more uncertainty around the business side.  But my guess is that he will do well.