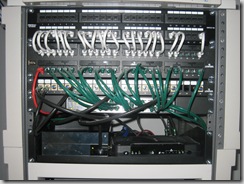 I love adding sophistication and complexity to my home network.  I suspect that’s typical of technophiles such as myself. But a few months back, I realized that I was adding complexity that didn’t have any value to me whatsoever other than scoring geek points around the water cooler.

I still have some simplification to complete, but I’m gaining on it. I got rid of my Windows Server Active Directory domain and stopped hosting my websites from home over FIOS. I also consolidated my file share and backup servers down to a virtual server running Windows Home Server.

I still have a custom Linux router with SSL VPN in front of the Verizon router and a LinkSys 802.11n wireless router, and the virtual host server box that’s currently running Windows Server 2008 R2 with Hyper-V and some virtuals. And I have three network printers, two desktops and two laptops for family members, and a Mac Mini and a Thinkpad for myself.

In future posts I plan to discuss the specific value I get from each component of the network along with some things I have discovered that others may find useful. Although it may seem like a nice-to-have, I actually find my VPN very useful. And I really like having two ethernet jacks in every room that are already connected to the network and ready to go.

I’m finally learning to ask myself whether I REALLY need a new toy before I go out and buy something new and shiny. If it doesn’t deliver a capability that the family or I will actually use, or if it’s going to require a lot of maintenance, I just don’t need it.

If there’s anything you would like to hear more about, please let me know in the comments.